The last day of work before the holiday and there was a noticeable lack of radio chatter - perhaps our best prepared trip ever? Time will tell. We met up at the airport coming from a variety of directions but as ever the Wyatt van made an appearance loaded with kit. With our calorie starved previous trips in mind I turned up with several boxes of power bars to hand out. At this point they were free which prompted some debate on how the market price of a power bar might rise as the trip, and hardships, progressed. Even Steve 'not a care in the world' Wyatt seemed to have learnt from his experiences and popped an extra one in his bag 'just in case'. After all the trips we have done it was a familiar sensation wheeling straining trolleys into the departure lounge checking out each other's packing strategies - making sure bikes get to the other end of a long haul flight in a fit state to ride requires some careful choices. As ever in this activity Andy was making the more careful choices with Duncan at least showing the most concern. One sensation that was less familiar to our trips was completing vaccinations at the airport, much to the surprise of those sharing the bench with needles and some furious checking the instructions before self-medication commenced. 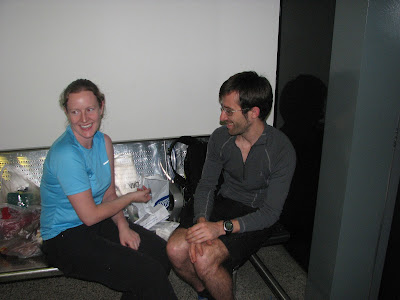 Check in and security were boringly smooth and we made ourselves comfortable with a pizza for lunch in the sure and safe knowledge we had sacks of time. Sacks became bags which transformed into envelopes and before long I was chatting on the phone to my folks to see Cliona running past having seen the departure board declare we were down to a sheet of time and a thin one at that. The normal panic stations ensued and in a comedy script only real life could write we tried to hustle to the plane to find we had Duncan's bags but no Duncan. Being pro's at hashing up airports we immediately split up and those tasked with finding Duncan hid behind a pillar to see what he would do when he found we had all high tailed it. Amusing as it was it didn't really help us in what should have been the higher priority of actually catching the flight but too tempting all the same. On the plane our fellow passengers included a man with his hand down his trousers for 10 hours straight and what seemed like a group of suited east end mafia behind us. Of course we were pleased to see curry on the menu for dinner followed by an all too short sleep before an all too jolly stewardess woke us up for an all too small breakfast.