Being a wild camp we were awake early but it was a sluggish start with legs feeling heavy from yesterday and the knowledge that today was going to be equally as tough. Hugh started the day with water duty and took a pan to scramble down the side of the very steep river bank to get some water. The way up was a touch trickier than anticipated and he arrived back with scrapes on his knees and the verdict that the water was too silty to use. Being desperately short on water we rolled back a km to get to a small side stream which Steve waded into to fill up our bottles. 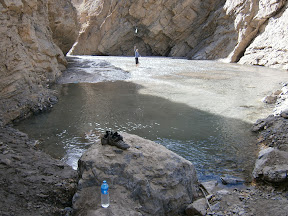 Finally we were onto the business of biking and I have to say the weather was fantastic. Fantastically hot at least but much better than cold and grey. Our first task of the day was to climb up 21 steep switchbacks - the 'Gata loops'. 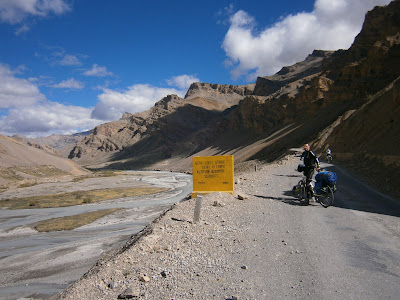 My tummy had not been 100% overnight and on the first loop my tank didn't feel all that full given what was ahead and with the heat it was clearly going to be a chore. Luckily I had my friends around to leave nice messages on the signs - 'Love the road not sheep (Colin)' especially perked me up! At the top of a hot stern climb we had reached just under 4700m and were happy to celebrate with some water and admire the view 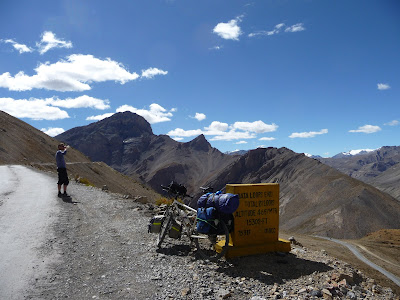 The scenery was getting more and more spectacular as we made our way into the mountains proper and with the crystal clear air we could finally start to appreciate the fruits of our efforts over a boiled egg or two. Of course the day wasn't over so the back slapping didn't last long. We rolled downhill fast and dropped a 100m to a point which the guide book suggested was a nice spot to camp but it was still very high and prefering to camp lower we pressed on over the next pass. Andy and Steve thought they had spotted a short cut and took a small track up the valley rather than taking on the switchbacks on the road. At first their choice looked good but then as Cliona, Duncan and I looked down we could see them pushing their bikes along the very rough track so perhaps not the short cut in time they had hoped for. It was hard work making progress and we were delighted when Cliona broke out some energy tablets to get us the final couple of km's. At the top we re-grouped and looked forward to 21km downhill to our destination. 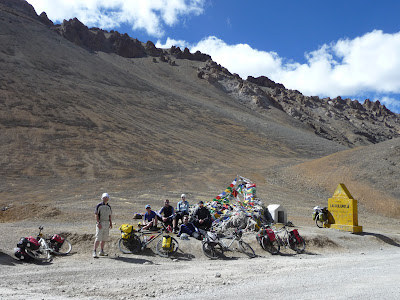 Actually the way down entered a narrow canyon and was spectacular biking that my tired body failed to appreciate. Any gentle rise set the legs burning and I for one was finding my limit. I was immensely pleased to see a small collection of parachute tents that make up the village Pang. Before we had rolled to a stop the owners of eat tent were out selling their superior tent, although to the untrained eye they looked identical. We picked based on a slightly more varied menu and soon got down to the hard work of having a cuppa and some food. After settling in we walked down to the river to clean ourselves up, picking a quiet spot upstream of the village. The water temperature was 'refreshing' but much needed. Extra amusement was had when Hugh got quite cross that he had lost his soap on the first dip. On the way back Steve tried a bit of bouldering but with loose rock and a stoney landing didn't display his usual fearless gusto and it remained unconquered. 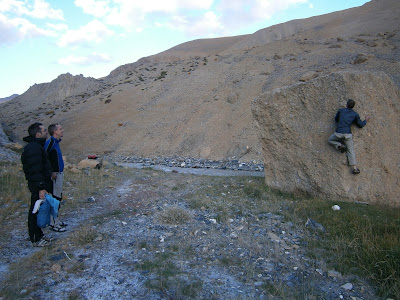 Our Hungarian friends for the day before came rolling in late, the chap had a very bad stomach and we heard him wrenching in the toilet block most of the evening - considering how I felt I was surprised he even made it in that condition.