A 'simple' up and over day but certainly a big day out in the hills. Not known for our early starts it will come as no surprise to learn that the two French lasses we talked to the night before went rolling past while we were having breakfast so we faffed for a bit to make sure they had a reasonable head start before setting off to catch up. The maize for breakfast turned out to be a winner and combined with a good sleep the night before tails were up.

The road was good and snaked up the valley, cutting back and forth. We went past the zing zing bar and caught up the French pair who must have and a very long day out given the pace they were setting. A little further along there was a Hungarian couple who offered me a biscuit as I went past, he even ran to thrust it into my hand which can only mean I looked more tired than I felt! It seems that today was to be social day as we spotted yet one more older French couple ahead but they seemed a bit less open to banter and all I got was a 'so you want to make it a race?' and then a disapproving 'he's crazy' as they saw Steve hanging onto the back of a truck indeed winning that race. 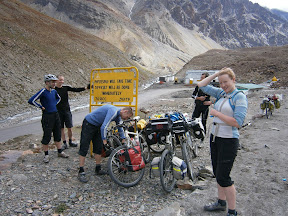 The scenery had started to change to more what we expected as we gained altitude, much bigger lumps of rock more worthy of this mountain range. It was also certainly arid and dry, highlighted by the fact that the sun was beating down and gently cooking us. This caused Hugh to have a touch of cramp but I should note that with cramp and pushing his bike he was about as fast as I was pedaling! Towards the top we all started to feel the altitude and were looking forward to the downhill to come. Sadly the road  excelled in throwing out hints that you might be topping out only to take pleasure in just one more climb round the corner. After a few false dawns, one derelict building and some dummy prayer flags we made it to the top. There we bumped into some lads going the other way, one English lad was only 19 but had the look in his eye of a long term cyclist having come all the way from England and was heading for Japan! 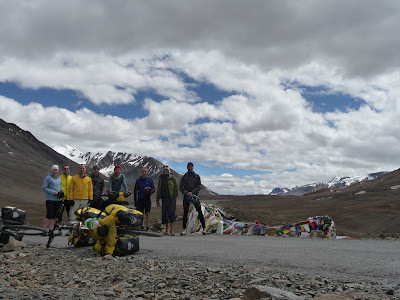 The downhill was most welcome and wrapped up we watched the km's sail by. We came to a police check point who asked to see our slips from the last check point, prompting Cliona to rummage in the dustbin bag where she had stored it earlier. The policeman would not be drawn on where was best to eat so we picked a very blue tent for a cuppa which sported a rather open air approach to a toilet, a squatter with a low fence round it but certainly with spectacular views. 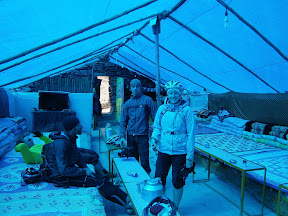 The final 31km of the day almost biked themselves, very flat with a tail wind almost strong enough at times to not bother turning the cranks! Having dropped to the valley floor we tracked alongside a deep river bed which hinted that finding water tonight might take more effort than expected. 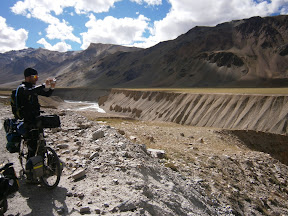 Even with the wind we weren't going to start the next days climb and it had been a long enough day so we found a good place to camp set back from the road and cooked up a nice meal of soya. We sat on a flat rock while Andy played with the night features on his camera, running around with his head torch on. We laughed but in the end there were some cool snaps. 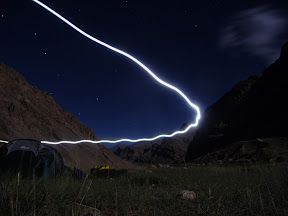