In what we hoped was our final chapter of the epic saga of Hugh's brakes we installed the new set in the morning while leisurely brewing up some coffee. We popped down the road for eggs and bananas for breakfast - it was very hot and nice to sit around....time that would have been better spent later in the day! 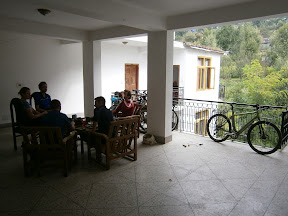 The pack up was relaxed and we headed into town for some last minute jobs. Number one on the list was haircuts. Steve had a bit of a false start when the clippers broke after the first decisive move but all turned out well with scissors. We finished it off with a cut throat razor shave and having learnt from past experiences made sure that we had agreed the price beforehand so there was no knife to the throat style haggling. To finish the job off they applied lots of cream and even what seemed to be a bit of powder puff - looking good Mr. Bolton, looking good! 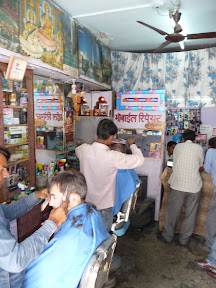 Job two was to buy some buggy cords, number three was to get some money and Hugh inserted number four, to buy a second karrimat to boost his chances of some good nights sleep in the coming days.

We took advantage of one last lunch out before leaving town. Hugh and Duncan ordered Schezwan chicken and we certianly got service with a smile, although in this case it was more a mocking 'this is way to hot for any mortal to eat but let's see how far these chumps will get!' than a 'have a nice meal'. While watching them struggle through their food we spotted the mountain bike guide who had helped us with Hugh's mechanical failures and after a bit of conversation agreed to arrange for some bike boxes to be delivered to Leh for us to use to pack the bikes on the way home. It's hard to imagine so much joy coming from a few pieces of cardboard but this represents a huge leap in the chances of getting the bikes home undamaged and we were pleased as punch. With this slice of luck still tickling us we set off at a typically late 3pm.

Heading out of town we passed through let's say not the richest area and it seemed that all the street side wooden shacks sold ski jackets, slightly at odds with the heat but some indication that it might get a bit cooler higher up. Curiously there seemed to be no ski's to complete the round up of ski equipment but we guessed that clothes were just easier to deal with so anyone can give it a go. The slope of the road was flat as we passed by these huts but then we turned away and up into the hills and left the outskirts of Manali behind.

With switch backs snaking up hill we came across a small town with a disproportionately large traffic problem - complete gridlock. As we weaved our way through the mayhem I have to wonder if they are still there honking horns and shouting. Some motorcyclists were heading the other way having tried to get over the pass but failing to get past some mud - something we noted but really how bad can it have been? Time will tell readers but all I'll say is that luckily we came armed with a good sense of humour. 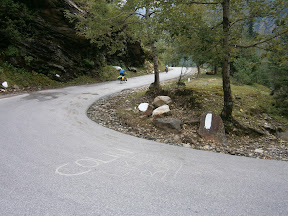 Despite this 'encouragement' we got to a small tent village where we had hoped for bigger things, not least some more tents - there were only six. With a larger settlement only 12km away we decided to press on despite the lengthening shadows. Of course shortly after the gathering clouds also made a decision - to pelt us with rain, after which the sun got in on the act and pulled up the shadows completely. Biking by head torch is arduous at best but in the circumstances we could think back to the morning and consider whether we could have shaved off a few minutes putting our feet up here, brewing coffee there to save us some of this 'fun'. To bump me out of such thoughts a pot hole kicked my front wheel and sent me sprawling on the floor - message received: stiffen the top lip and pay attention! On arrival it was clear that this was a much bigger and more permanent place, with even a small temple to service the locals. However, it was also clearly past most people's bedtime and all seemed shut up for the day. Resourceful as ever Andy and Steve dashed off and found someone just shutting up who hadn't quite managed to finish the job before they had haggled for a room to stay for the night. Grateful to be in the dry at last we still kept an air of caution and put the ground sheet over the bed to avoid bed bugs joining the clouds and sun in giving us a hard time. We had a quick meal in the tent, limiting ourselves to whatever the owner had as he was clearly torn between sleep and serving us. My final note in my diary for the day summed up the mood 'bedraggled but here'.