For breakfast we took up our seats with a view and had chapatis with potato and chilli, on the side was the option of lime pickle but this was a step too far for me. Of course there was some more faff with Hugh's brakes with the rear system failing completely leaving only half power on the front brakes but he gamely decided to give it a go. As we were leaving it was obviously the time to catch buses anywhere, including school. We amused a group of girls when we started putting on our lip salve as they admired our lipstick technique. The heat had kicked off much earlier than we had but it was to be an easy day of only 30km to get to the main road and then hitch a lift up to Manali on whatever motorised transport stood a suitable chance of surviving the main road. On the way down the valley it was quick biking but a little rough, rough enough for my t-shirt to fall off the back. It was run over a couple of times by the look of it but a local grabbed it and waved Hugh down who was following and handed it over which saved me tracking back for it. The final few uphills felt worse in the heat and I was glad to get to the town on the main road. 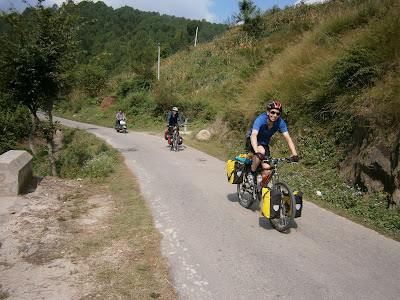 We started to look for any likely transport to get up to Manali as we didn't fancy biking up the main road given the number of lorries thundering past. This was driven home when we looked over the bridge where a section of railing had been bent over only to see the lorry face down in the river bed - there is no way that story had a happy ending. Looking behind us we realised that where we stood was just where any vehicle taking the corner behind us a ilttle too quick would end up so shuffled along promptly. 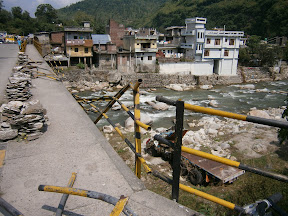 We had some fun trying to negotiate a lift to Manali with 6 bikes and the options were starting to look a bit thin but eventually we persuaded a tuk tuk with an open back to take all the bikes with Andy and Steve while the rest of us with bags jumped in a taxis. The tuk tuk was ridiculously overloaded and Andy started to worry Steve with talk of center of mass and the very real possibility of it rolling over. Andy put his helmet on and soon enough Steve had followed suit in a very inadequate token gesture to health and safety. 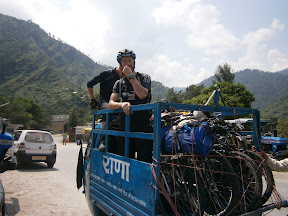 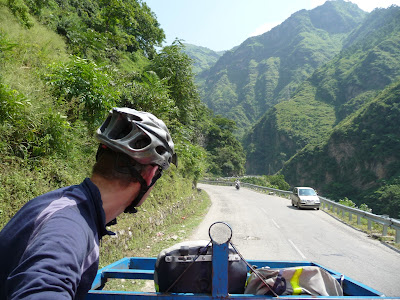 The other vehicle was not a hot bed of happiness either, space being rather limited, the music rather over loud and a driver multitasking trying to call ahead to arrange hotels for us at the risk of us not making it at all. To top it off the driver spat out the front window only for Duncan to catch some in the back wash through the rear window.

We stopped half way for a quick drink at an establishment that left the impression that dehydration might in fact be the healthier option. Cliona asked for the toilet and was pointed to a door at the back, only to find that inside there was only a urinal which wasn't all that helpful. The rest of the journey I dozed off and soon we arrived at our drivers first choice of hotel which actually wasn't too bad so we decided to cut the faff and just back two rooms. 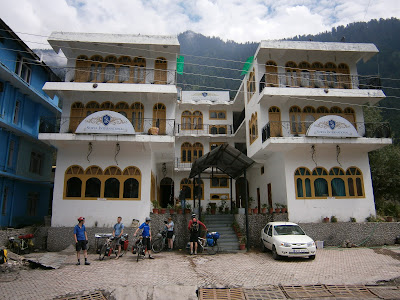 Of course the Andy and Steve tuk tuk was much slower so we headed into town while we waited for them at the bus station. It wasn't as slow as we had thought and just as we were wondering how to kill the time they arrived and we were soon unloading the bikes and baggage at the hotel. We had time to brew up a celebratory coffee before a local mountain bike guide popped round to look at Hugh's brakes. He was super helpful given that there was no money in this for him so thanks Raju (http://magicmountainadventures.com/)!! It was soon obvious we needed more parts and Raju offered to head out with Steve and Hugh to a bike shop down the road to source some kit.

With time to kill the rest of us wondering into town again to see what it had to offer. Manali is meant to be something of a relaxing get away but the center is quite hectic and the roads were pretty dirty - even for India. We did some supply shopping including batteries where I ended up playing shop keeper to make up for the lack of enthusiasm being shown by the proprietor.