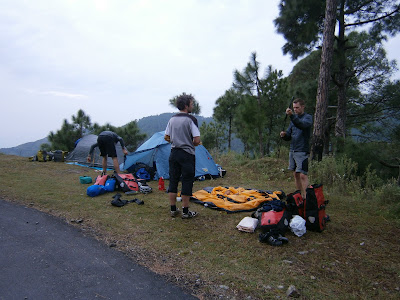 The by now familiar faff with Hugh's brakes turned a 6.15am start into an 8am square one after some coffee and buns for breakfast.We soon stopped for a second banana breakfast at the first village we came across. From there we didn't go far to find the next much larger settlement which was busy with a rush hour of workers and school children. We took the opportunity to grab some supplies before heading of in earnest. The weather was hot and humid and I was soon puffing and panting noting that sweat did not make much of an effort to evaporate, more just drip instead which wasn't much use in the primary task of cooling but was making excellent headway in terms of dehydration. Between the warmth, humidity, climb and general lack of fitness I was soon struggling at the back. Andy dropped back to tease me up the hill and while I happily took some of his power bar I stopped short of grabbing a tow - what doesn't kill you and all that. At the top was a small military checkpoint alongside a little shop. What there wasn't were any fizzy drinks as my friends had just drunk them dry without saving any for their 'pal' struggling along - welcome to our brand of teamwork.

From the top we had some lovely downhill to negotiate and with it a cooling breeze which was most welcome. There were a few moments when oncoming vehicles weren't spotted in time for a gentle swing to one side  and the surface was a little rougher than the previous day but still great fun. With the road weaving to follow the contours of the mountain side we came into the crook of a small valley with the road bending sharply around a hair pin to the left with what looked like a small bridge over the stream. This seemed like a better option than the ford alongside but a local was waving up across the watery option. No point in ignoring his advice so we swept across the ford and on glancing to the right as we went across it became clear that the middle 10 feet of the bridge were yet to be finished which would have made a spectacular accident had we opted for the bridge.

Having lost some height and worked on our grip strength for some time I stopped by the side of the road in what looked like the middle of no where, just behind a small mound overlooking the valley. While the view was nice I was less pleased to see three locals appear at the top of the mound also admiring the view. We chatted for a bit but to be honest it is hard to have flowing conversation in broken English while squatting on the ground over a self dug toilet pit.

We re-grouped for a drinks break on top of what looked like a garage dug into the side of the hill. With the glow of the down hill still shining along with the sun it felt very laid back and a gentle silence descended over us. Only to be broken by Cliona breaking wind which we took to be the sign to move on. 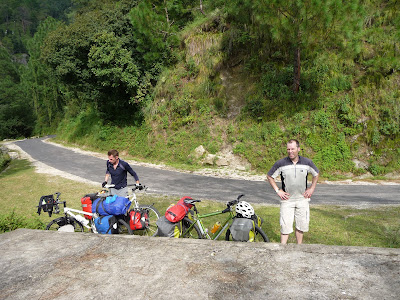 The next section was a bit up and down in terms of height and weather. With lots of clouds we could hear thunder around and soon enough it poured with rain - full on buckets coming out the sky and then 2km later it had stopped! Biking without glasses in the rain wasn't much fun but we were soon drying out and rolling into Chail Chowk. This town is basically a three way roundabout connecting roads across the mountains with shops around and little else. We had hoped to get further today but the rain had damped our enthusiasm and we soon found a hostel over looking the main triangle. 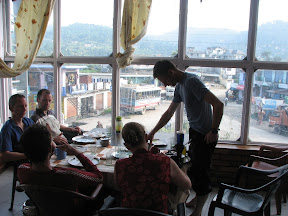 Of course this sounded expensive and so we looked for something a bit cheaper only to discover that he wasn't joking when he said he was the only option in town. Back again and Steve managed to haggle from a pretty weak position. The rooms were pretty damp but we had showers, en suite and hot water so not all bad. The other big plus was the eating area with a window overlooking the roundabout through which we soon saw it starting to rain again so felt that stopping was the right call.