A designated faff day and so it proved! Our end of the day communication seemed to have crossed wires which led to Hugh firmly believing we were all getting up at 8am, not the view shared by all and most certainly not shared by the dogs barking for most of the night.  That said in the end we needed all the time we could get. After breakfast the moment of truth time had arrived - the traditional unpacking of bikes and the following inspection to see whether they had survived the journey in a fit state to ride. This year it was a close call. It started off with the normal chaotic scene of bike parts being piled high around the boxes and packing materials. This year we started to gather an interested crowd who happily watched as Duncan had the initial flutters of panic when his forks did not fit and suspected they might have been bent but in the end a second try and all seemed well. Hugh's bike fell together with custom ease and he was the first out the block for the test ride. The drive of the hotel was a stern slope and at the top of this veritable ski jump Hugh tested his brakes once and then pushed off. Little did he know that his first squeeze of the brakes had just pushed the majority of his brake fluid out of the system and he was now riding largely without much capacity to stop other than feet on the floor. After a spike in his heart rate and a quick test of his bike handling skills he was back to initiate some serious faff. Alongside the faff was the side debate on the best brake solution for cycle touring and hydraulic brakes did not feature at the top of the list. Turns out that the seals and the plug in the reservoir by the brake levers had not travelled so well and each squeeze of the brakes pushed more fluid out the system and so damping the braking power. While everyone else caught up with Hugh's early efficiency his brakes had some luck - a local had some brake fluid to replace the puddle we had left on the driveway.
Later than planned we headed into town. Shimla seemed to be a holiday destination for Indians and was very busy but very little hassle. This is except for the policeman telling Steve off for biking in a no bike zone. With lunch on our mind we selected a restaurant with a balcony over the main drag. Once up the stairs we realized why this prime spot had space when everywhere else seemed busy - the metal frame that would form the roof was being cut and welded on the floor somewhat limiting conversation for short periods at a time. Hunger overcame our need for conversation and we were treated to another fine meal. 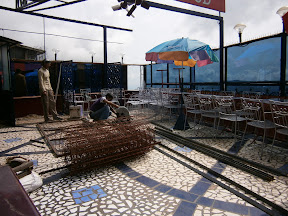 Following this we had three jobs; get food, post our bike boxes to the final destination, book flights. Book flights? But I thought you had told us this was our most organized trip so far, what flights are these? Well, optimism had taken hold and at the end of our route we had hoped to get a bus back but on the way to Shimla we had been assured that this would take several days. Already on a tight schedule this simply didn't fit so some emergency flight booking was in order. Our first attempt failed in a blaze of firefox crashing in a small internet café so operations were taken back to the hotel and their phone. In retrospect this was an entertainingly painful call but at the time it was immensely slow going. Booking six people on the only flight that had space was hard work with all the details spelt out using the phonetic alphabet and then re-checked. This exposed the hole in my knowledge of all the letters which prompted everyone else to start suggesting their own options 'b for Bollywood, g for goat…'. Next up was trying to explain how much luggage we had, specifically six bikes. We continued under the crossed wires of them thinking motorbikes and me bicycles until the light dawned and suddenly everything was clear. This all took far too long judging by the crowd of hungry cyclists behind me but eventually we were on our way. Sunday night in Shimla seemed to a party night with everywhere busy. We walked through the lower bazaar and were once again surprised by the almost absent attempts to sell us anything - not what we expected. With the sun down we headed for a fairly posh restaurant (for us!) for another good feed.