Woke up with the door bell ringing in our ears, Steve and I being fast asleep while Duncan and Hugh were up and at it! Despite this sluggishness on our part we soon came back into the game when we got to the breakfast table and we all had a double round of food to try and put something in the tank for the day ahead given last nights poor showing. With plenty of jobs on offer we divided and mainly conquered. Steve and Andy set themselves up as the mechanics and poured some much needed mechanical love over the bikes while the rest of us went into town to stock up on supplies which we knew would be rarer from this point forwards. The shoppers walked the strip of shops that town had to offer but this was disappointing quick so on the return leg we paid much more attention to what each shop had to offer. Without much to show Cliona popped into the last shop to discover a veritable gold mine - sugar, soya, maize as well as biscuits and snacks. Back at base with loaded bags we faffed for a while loading up the bikes before setting off and giving Duncan the chance to practise his thousand mile stare: 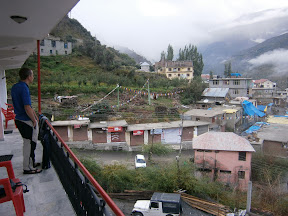 With stiff legs and creaking knees we headed back up the hill to try and find our route out of town which wasn't as easy as it sounds. Eventually some guy pointed up up on the right track and we set off happier that every pedal was at least in the right direction. The day sadly statred off downhill, sadly that is because we knew the uphill was just saving itself up for later but on the whoel the road was well tarmaced and the going relatively smooth. Some sections of road were under repair and broken up but we got plenty of hello's and namaste's from the workers to see us on our way.

For lunch we arrived at the village of Jispa where our guide book said good things about the lunch offered at the main hotel. However, the hotel itself knew nothing of the sort and after some confusing conversation we were sent on our way quite crest fallen. Pushing a little further on we saw what looked like a resturant with tables set out. What it didn't have was any customers or indeed staff. The door slammed like a horror movie set and only after some poking around did we find four teenagers sitting in the sun out the back. They seemed pretty confused by the concept of customers but didn't eventually start to give indications that they might be able to learn how to cook some rice for us if we were desperate. Deciding that perhaps we hadn't plumbed those depths of desperation. Leaving we befriended a dog who might also have given up on teh lounging lads as he followed up for the next 2km where the next and final option for lunch presented itself. We picked up four Chow Mein's and declared it worth the wait.

Rolling off we were a bit slow as the bellies were happily nice and full. The afternoon was a bit of a grind. One notable point was a check point which Hugh completely failed to notice and sailed straight through, prompting the guard to raise a rope across the road to catch the rest of us to at least try and justify his job. Trying to not look too impatient we waited the guard out and he waved us on our way 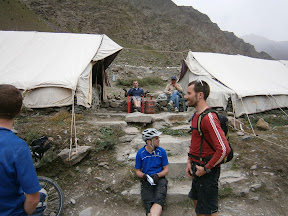 The road turned upwards as the weather took a nose dive. The landscape reminded us very much of a scaled up Lake district with mist and clouds to match. 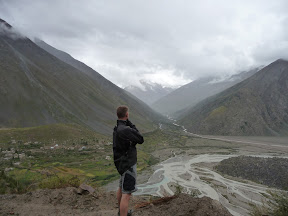 We were soon in waterproofs plodding along as the clouds gave up their moisture. We came to a small parachute tent set up as a cafe and bumped into two French lasses who we had met at the hotel. After saying hello and grabbing cup of tea we headed on for a few km's looking for a wild camp and found a nice spot by the river. It's been a while since we had to break camp and the lack of practise showed, probably not helped by me running off to record my video diary trying to catch the last of the daylight. With the faff out the way we cooked up a good tea, three square meals in a day something of a rarity on our trips in general. Despite the fact that trucks were still rumbling past we were soon asleep. 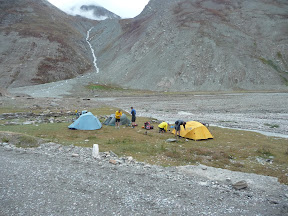 On a side topic we should mention some of the many road safety signs we saw on our route. While always giving good advice these had a certain creative flair which made us smile, two I noted down for the day: