The first day on the bikes and those hoping we made a sharp start in the morning were to be disappointed. Overnight the good work done on Hugh's brakes had carefully been unpicked by the bike gremlins so there was some faff to try and restore at least a little braking capacity - something which was going to be tested during the day given the hilly nature of the ride. Couple with this is the fact it was the first pack up of the day, compounded by us starting in a nice warm hotel which provided little incentive to get going. The final nail in the coffin was that Shimla does not boast an abundance of road signs and certainly not a clear and simple traffic layout. Perched on the knife edge of a ridge there is basically one crucial factor when leaving; which side are you going down. 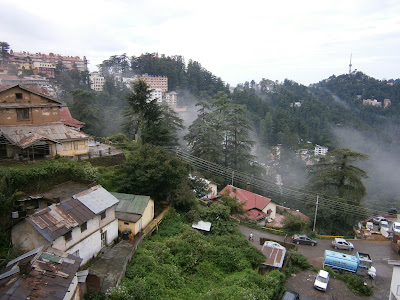 With little information to go on we optimistically free wheeled down a road enjoying the busy traffic and getting used to the handling of bikes loaded up with a trips worth of gear. Of course, more interactions with locals to confirm this was the right direction might have avoided us pushing said loaded bikes back up the hill a short while later. There were plenty of horns advising us we shouldn't be on the road but I think they were less bothered about which direction we were heading in and more about the fact that we existed at all. Back near where we started our chances of picking the right path were at least a notch higher given we had ruled out one road so the optimism returned and we set off again. Soon we passed a school yard full of children in some sort of ceremony. It turns out that it was 'teachers day' where the pupils give prizes to the teachers in thanks for their efforts. A somewhat strange concept from what we remembered of our school daze.

Having asked at almost every junction which way to go we felt confident we had left Shimla in good shape but the road remained busy so it was hard to relax. This all changed when we came to a vital left turn where it seemed someone had designed the road for cyclists, a gentle downhill described as 'cruise control for a bike', sweeping curves and lovely tarmac. There were sharp hills all around and the road nicely picked the perfect route through the contours. Words failed most of us when trying to describe the landscape but Hugh summed it up "if the road surface matched the topology we'd have ourselves a situation". This nirvana of touring did it's best to lull us into a false sense of security which led to Duncan dreamily riding alongside the rest of the group on the wrong side of the road chatting happily. The rude awakening was the truck coming the other way hidden by the bend which led to some rather sharp bike handling as Duncan dived for the safety of the left side of the road. Perhaps that time we had deserved the horn. With great progress being made the next jolt, literally, came from three unmarked speed bumps hidden in plain sight across the road. Something of a shudder for most, for Duncan it was the moment his panniers broke free and bounced down the road. This provided some entertainment for the locals and us alike but thankfully all was fine. 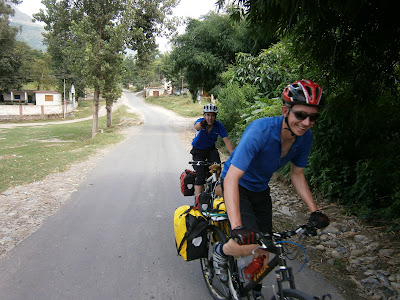 With forest and greenery providing shelter from the sun we found a small stream to stop by for a snack and enjoyed laying back in the warmth - something we should have savored a bit more given what was to come. Of course this stop also coincided with another fix for Hugh's brakes which had become rather unsatisfactory during the morning. 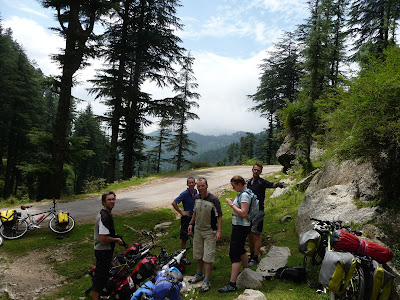 Following our perfect road some more we started to look out for somewhere to stock up on food. Coming over a bridge and into a small village we had a choice of a local joint or a hotel spa - all but Steve went for the latter option and soon we were installed on the balcony looking down the valley. In a rare moment of conservatism Andy commented that we should set aside any thoughts of swimming in the pool in case of mosquito lava, possibly he could see the rest of the day being burnt. Still the food and view were good enough to keep us there probably a little longer than we should have stayed but this is a holiday right? 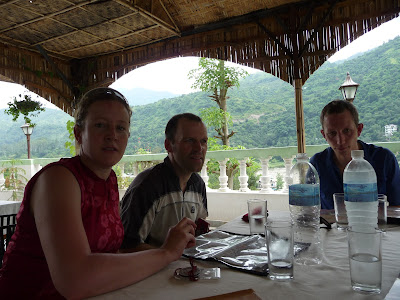 Setting off the road snaked uphill consistently for the rest of the day and it was slow going. Obviously we were back to our antics of hanging onto whatever motorized vehicle that went by. Steve pushed this to the next level and had a lot of luck with motorbikes where as I managed a big cheer from the truck filled to the brim with ladies. The going was tough with the heat making sure we were losing our body weights in sweat and Cliona and I were the back markers plodding at 9km/h for much of the afternoon. As we gained altitude it not only got darker but the villages were less frequent and with them places to stop for food and bottled water. We were starting to grind to a halt with the light failing rapidly, coincidentally the grinding really took shape as we were passing a nice spot to camp. However, Steve has scouted ahead so we felt obliged to try and catch him before actually putting the tents up. Further on Steve reported a nice lay by just off the main road which looked good. Just as we were eying up where to put the tents two villagers passed by who didn't seem too enthusiastic about having us as neighbors for the night but unperturbed we mentally bagged the site and rolled 400 metres into a small village in the dark. The only sign of life was a small fire in a wooden shack just off the road so we popped our heads round looking hopefully for some food.

We negotiated 2kg of chicken and some rice. Of course we should have negotiated which 2kg of he chicken we were about to get as most of it seemed to be gristle where as we were hoping for more quality protein. That said at this point beggars really can't be too choosey. The stock was good and the piles of rice more than welcome. We were offered free salad (did we pay too much!?) and indeed the top man from the village came along to sharpen the price to 800rs - but if we included the space we were sleeping on for the night it was a bargain considering the lack of alternatives. Following this we tried and failed to buy some powdered milk for the morning but did enjoy the hot milk drinks that arrived instead that arrived.

Back at our little camp spot we threw the tents up and put rocks around the area to ward off trucks, or at least give them a bump before the flattened us. A couple of locals on bikes pulled up to see what we were up to but obviously decided we were harmless and probably scammed out. Despite the altitude we had gained the night was hot and muggy but a hard day on the bike does wonders for the capacity to sleep!