Luckily the day started off dry, if a little overcast, after listening to the sound of rain for much of the night. Getting up it was at least dry but still cloudy promising further showers to come. The start of the day was a climb to the top of the Rohtang pass which on a map looked like a nice 17km stretch gaining 700m in height. What it left out was the sodden ground and the 7km of mud slide that had covered the tight switch backs. The mud seemed to have come out of the set of a disaster movie and there were vehicles stuck and being dug/pulled/lifted out of trouble. This made the road barely passable on a bike and we were soon off the saddles and wading through the mud slurry at almost no pace at all. The high effort little gain ratio prompted Steve to comment 'you could bike all day in the Cotswolds and not be this tired' which gives you some indication on how we were feeling. We saw many people turning round and heading home but we thought we had an edge, being on foot we could scramble up the slope to skip a section of switch back and mud. On the counter balance the slopes were very steep and rocky and indeed sometimes you win (Andy, Cliona) and sometimes you lose, badly (Hugh, Duncan, Colin  Steve). It turns out that picking your section of slope to scramble up is key and after seeing the success of Andy and Cliona the rest of us selected the next likely looking spot and start carrying our bags on our backs straight up the slope to where we could see the road above. This turned out to be more ambitious than our legs could pull off and with the sharp slope (climbing ropes anyone?) and loose and muddy rocks going was ridiculously slow. Andy and Cliona biked round the switch back and easily made it to the top before we had shuttled our gear up. We dropped back down to grab our bikes and Duncan decided he had had enough and would bike round by the road while the rest of us waited for him to arrive, about a hundred metres from a small rise in the road. The mist was down and visibility was low but eventually we saw Duncan appearing from the mist looking pleased to have made it. In his mind I'm sure there was the plan to casually roll down the slope to meet us, maybe with fists raised aloft as if winning the Tour de France. The reality was more like Only Fools and Horses as his back wheel slipped once unbalancing him, slipped twice to make matters worse and then almost in slow motion he fell sideways into the mud. After a tough morning we all needed a laugh and we grabbed the opportunity with both hands and feet, except that is for Duncan who walked it in covered in mud. 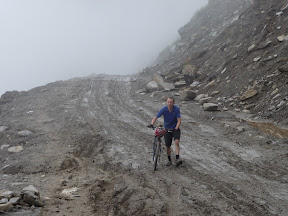 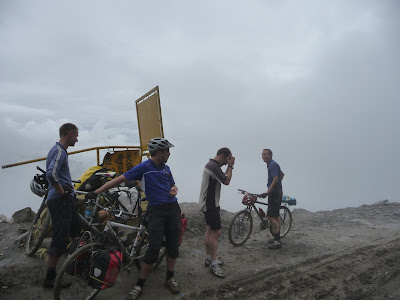 We put our bags on the bikes and set off again with aching sides and a slight regret we did not capture the moment on video. Heading up through the mist was cold and damp but eventually we got to tarmac and then to just 1km from the summit where we stopped in a tea tent for something warm and to get dressed up for the descent. Huddled in the tent out of the weather was nice but we were all aware that with another 80km to go we didn't have the luxury of hanging around for too long. 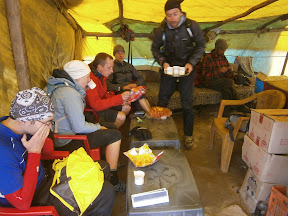 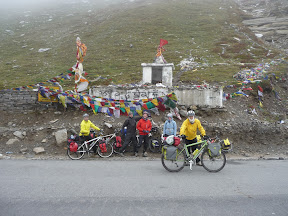 The downhill was good but could have done without the a couple of hazards to keep us on our toes. Firstly the herd of sheep who clearly knew who was going to get of of whose way and then odd sections of broken up tarmac to rattle our bones and in Hugh's case eject two bags off the back of his bike - he didn't notice but luckily wasn't at the back of the group. 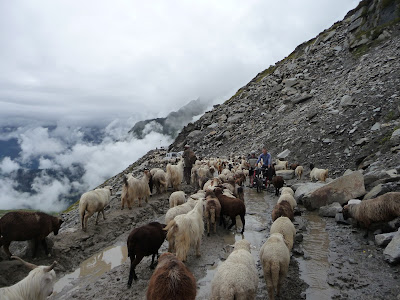 Once into the valley the weather was dry and warm and the road followed the river with just some gentle ups and downs but we still had a long haul to get home. Daylight hours were not in abundant supply so it was heads down stuff. Even Andy needed some power bar boost! In the end we sneaked into town just as the light was failing and after some initial confusion managed to find the hotel suggested by the guide book. Not quite as easy as the map suggested as the town is on a steep slope which led to some disorientation. However  with our bikes on the back balcony and the rooms looking good we were filled with hope regarding the evening food, sadly to be disappointed by the very small portions of so-so food, scant reward for the day we had just put in. Steve and Andy summed it up when declaring that they eat more after a day at work let alone a day on the bike. We talked briefly about heading out to find something else but the need for sleep won over.