India is not an easy place to sum up to set the scene for our trip. While much of the challenge was physical this more than most of our destinations also held a cultural hurdle to overcome. We kicked off with the simple, trying to figure out the exchange rates and how much to extract from the ATM - perhaps our preparations hadn't been as good as we thought. Next step was calling the company who had offered to arrange a bus for us and our bike north from Delhi, who obviously also didn't believe the flight was going to be on time and so hadn't turned up to meet us. The driver eventually found us and took a worried look at our baggage which hadn't really factored into his plans when sizing up the size small van he needed. With him leading the way we followed somewhat bleary eyed. Not really paying attention to the box on my trolley we almost had some entertaining local contact when it slid off narrowly missing a small dog being walked the other way. Our bus was small but came with a roof rack and Steve and Andy soon got to work securing the bike boxes to the top. 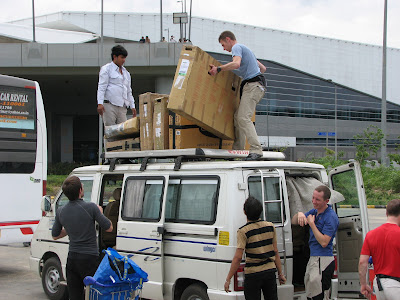 Perhaps a little more top heavy that ideal we clambered inside and in a proper introduction to Indian were immediately asked for money to pay the 'airport leaving tax'. A little dubious we handed over the cash after putting up some token resistance and were pleased to see it made it into the hands of someone who was if not official then had at least made the effort to put on a uniform. Having not paid in full we were driven through the hectic streets of Delhi to the tourist office where we had booked our transport from the UK. Steve and I went inside to pay and over a civil cup of tea Steve held firm that airport departure taxes were not normal practice. After much back and forth it turned out that they had no official receipt to show us and much to my surprise agreed to reduce the price by the amount of the tax. Steve 'silver tongue' Wyatt had worked his magic but obviously at the cost of time given that back at the bus a feeding frenzy of snacks had started. We headed off…..and after a few minutes once again pulled up at the office. With much concern that their reputation wasn't looking quite bomb proof they wanted to show us the official receipt that they had found, but were happy to waive the fee, presumably on the condition that we didn't propagate rumors of fanciful charges being levied at tired, unsuspecting tourists. The defense moves to strike this from the record. Back on the move through heavy traffic we were shortly waved over by a police man with our driver muttering under his breath. After some fast debate between our driver and the official about the thickness of woolwhich  would fit comfortably over our heads it turned out we were being charged an 'over loading tax'. This had some merit as there were six large bike boxes strapped to the roof. However, the prosecution looked a little less sure when while paying this tax a bike went past with plastic boxes piled about 20 feet high in the air and did not seem to qualify. 200Rs out of pocket but a story in the bag we pulled out onto the motorway out of Delhi, the surface of which was good but sadly the same could not be said of the driving on top of it. Every 15km we would be diverted off the main road where a series of fly overs were being built. This allowed us to check our shadow to gauge whether it still contained the bulk of six bikes. We confirmed that all was well when we pulled off into the Paradise hotel for food. Despite the empty modest restaurant I think the butter chicken we had rated highest for our stay in India - which might have set our expectations a little high a little early. While enjoying our feast of food it became obvious that the driver was on a different timescale when it came to eating and after much waving ushered us back onto the bus for the final 123km leg of the journey. Here we pulled off the motorway and started on the winding mountain roads so progress slowed somewhat. This clearly frustrated the driver who felt that he should be making better time and so the overtaking was a little on the optimistic side - it was hard to doze off. With sleeping off the list we talked about the need for a 'water monitor'. This is the faint whisper of experience helping us out, last time we biked in the Himalayas we managed to drink untreated water with some obvious consequences. Duncan ended any debate on whether this role was really needed with a very final 'It's pivotal not trivial'. We all took a moment to recall some of Duncan's first hand, and if I may say so first class, experience in this field and felt compelled to agreed.

Arriving in Shimla late at night we then spent good sleeping minutes on looking for somewhere to stay having been told the first couple of hotels were full. Luckily this being India there was a tout on the street who was on the lookout for the unlikely event of lost tourists needing somewhere to stay at 11.30pm - but in this case it paid off for all of us. Having checked out his 'medium tariff' option we all agreed that at least it was an option so we gratefully took their balcony rooms (which only lacked the significant feature of a balcony), ignored the classy touch of mirrors in the head boards and crashed out.