Our last big day up and over the final, and biggest, pass. We were up at 6.30am to fill up on a breakfast of porridge, maize and chocolate powder to fuel us up for the push ahead. It took us a while to pack up and get going on stiff legs under the heavy cloud cover for which we would be thankful for later. Only a little further down the track than we had ventured the day before we found a couple of parachute tents by the side of the road which would have made a perfect stopping place - if only we had pushed on a little further before turning back and heading down to the lake only to come almost all the way back again! Often Steve advocates going on that extra 10% just to see if anything better turns up and while this tactic on many occasions has disappointed here would have been a golden opportunity to buck the trend. While looking fondly at the tent area we spotted an advert for a rather tough ultra marathon - 222km - which even Andy thought was excessive! 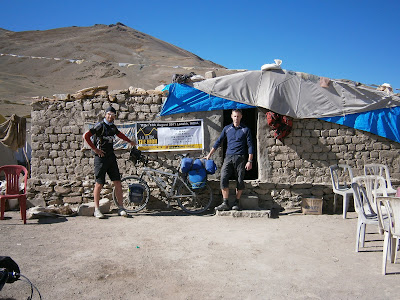 From here the challenge of the day was one long climb up to the second highest point on a road in the world. Up ahead we could see glimpses of the road cutting up the mountain side but not really the length of the dog legs back into the valleys but at least this stretched the gradient out somewhat. Initially encouraged by a patch of tarmac we soon reverted back to a track. We all took Hugh's advice and took it slow but sure - a game of patience rather than a sprint. Every 150m of height climbed we meet up for a break before setting off again. Thankful for the cloud cover and the lower temperatures we settled into a rhythm and looking back could see that good progress was being made. Of course when Cliona pulled out a packet of fruit pastels this helped take the aches away for a while!

Nearing the top we had to maneuver around a bulldozer which was cleaning up some small land slides and through a light mist we spotted some prayer flags - almost at the top. Not exactly a sprint finish but then we were at 5300m with  a light flurry of snow coming down reminding us that in a few weeks the road would be shut. 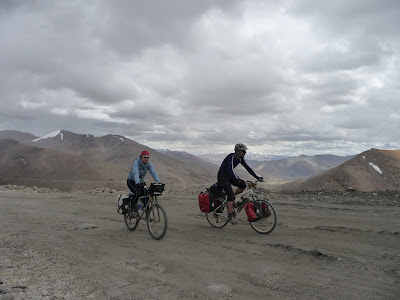 Steve, Andy and Hugh had been there a few minutes and already looked chilly so we quickly wrapped up and got the obligatory group shots. 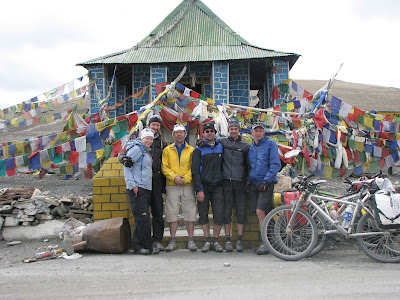 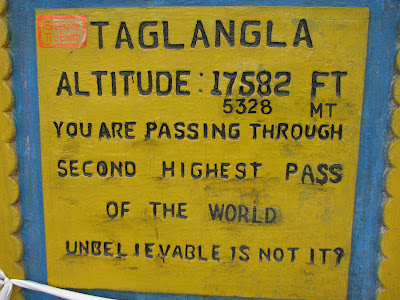 What was more unbelievable was the English chap we met at the top who had a shiny Enfield bike he had ridden all the way from England on only vegetable oil. The image of a classic biker was somewhat damaged by the GPS unit on the front and the Mac book he pulled out the panniers. However, checking the guys blog (http://www.vegibike.com/) it seems he was still on the move two years later so top marks for effort!

We ducked into a small building to grab a welcome hot drink and some biscuits before seriously wrapping up for the downhill. Initially rough it wasn't too pleasant but soon we hit lovely tarmac and top speeds. Racing like we were winning the Tour De France we were kept honest by the odd small section of untarmaced track, one skillfully hidden just round a corner which caused much testing of our bike handling skills and thankfully we all passed. With 1300m to drop there was plenty of fun round switch backs and then into the base of the valley. The geology in the valley was fantastic with coloured rock highlighting the ripples and layers - a school trip dream. 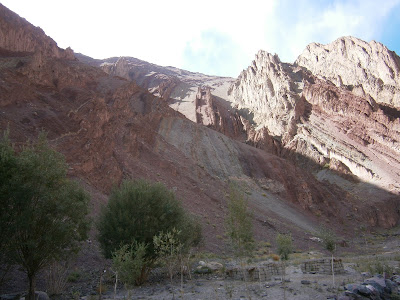 As we dropped height we started to see more trees and vegetation and as the realization that the tough part of the day, and indeed the trip, was firmly behind us the mood was buoyant. We stopped again at a cafe for another round of snacks to watch yet another Enfield rider pull up and then chuckled at the notorious mechanical record of these popular bikes when oil started leaking immediately onto the road. 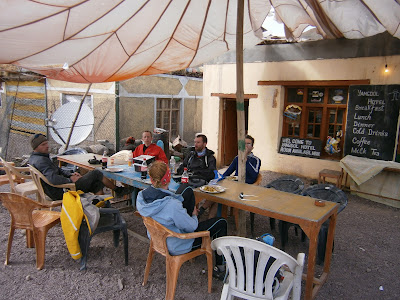 We had pinned our hopes on finding somewhere to stay in Upshi and we arrived more than ready to celebrate a long and successful day out. Upshi however wasn't so obviously in the mood for anything and it turned out to be a lot smaller than we expected with only a handful of restaurants on this cross roads. With nothing obvious on offer we were contemplating having to push on and stay in a tent and this caused some chins to drop but they soon perked up again when Andy came back from running round scouting out every building to declare he had found a ten person room we could use. Phew! 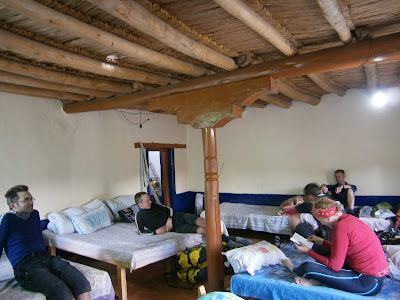 On first inspection we noticed a not so faint smell of petrol and found two Jerry cans full at the end of one bed which we promptly escorted out the room. After some not so warm washes from a basin downstairs we were more than ready to go find food. We had a good feed and decided on pancakes for dessert - I can't remember exactly why we thought they were on offer but we did have to mime cooking them, almost got omelets, and forced the owner to run out and borrow a frying pan from a friend. Still the food was welcome and set us up for a sound nights sleep.