Clearly today was going to be a low stress day given we only had 49km along the base of a valley and even the short uphill at the end held no challenge even on weary legs. Packing up in the morning we were up and out quickly led surprisingly by Andy - not traditionally an early bird. On the road we started to see more buildings and some army bases as we were getting close to the border. One of these boasted a museum but after strolling around and being told it was shut we cracked on, keen not to overstay our welcome in case they wanted to extend it further. We stopped off by a Tibetan style palace modeled on the palace in Lhasa. In the burning heat we skipped running up the steps for a closer look. However, I took the opportunity to grab some photos of each person to make up a 360 spinning avatar just to capture the state of our kit and ourselves at the end of the ride so for an more visual introduction to the team check them out. We did of course still see some entertaining road signs to keep the smiles on our faces: 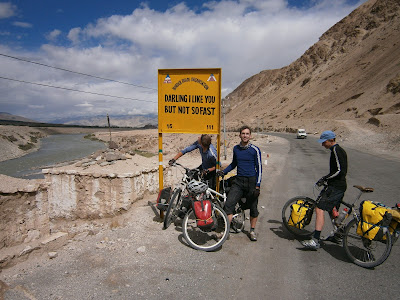 As we approached Leh the traffic picked up considerably and a quick shower saw us scrambling for our coats. However this was little impediment to rolling up the final stiff slope into town and grabbing a quick celebratory photo from Hugh standing in the middle of the road 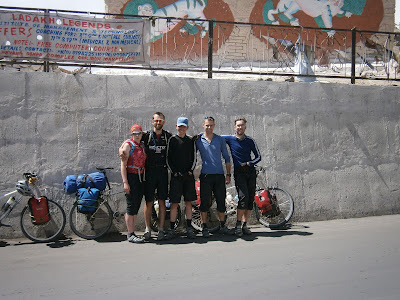 Into town food was the top priority and we found a pizza restaurant on the roof of one building and spent a few minutes piling up our bikes under the stairs and locking them together as best we could. Frankly if someone came to grab them and sprinted away I'm not sure we would have had much energy to chase them down but at least we made sure they would have to put some effort in. A change of food was very much appreciated and looking over the balcony we could see a lot of western tourists were in town, much more than we had seen in a while. Steve, Cliona and Duncan set out to find a hotel and came back having scored a winner named after the lake we almost camped next to a few days earlier. The only down side being there was no hot water for a few hours so it was cold showers all round.

With an afternoon to kill Duncan, Steve, Hugh and myself set about exploring this little town in pretty much the middle of no where. If our expectations were low they were easily surpassed.  We saw a monastery on top of the hill started to head towards it, ducking through a number of alleys and I thought everyone was being a little optimistic on the navigation until I spotted the signs that they were following! Half way we headed up some steps for a nice view across town. 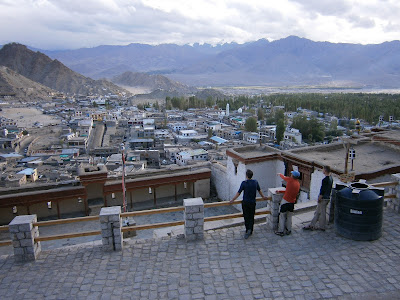 To make the final climb up to the monastery more interesting we ignored the path and scrambled up the rocky ridge instead. At the top we spent 20 rupees to walk around the very shaky tower standing over the monastry - certainly this was not passing any health and safety inspections and we worried Duncan with a little foot stamping while he was exposed near the edge! 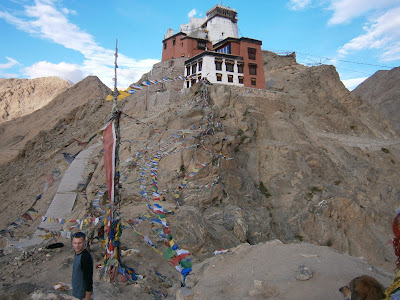 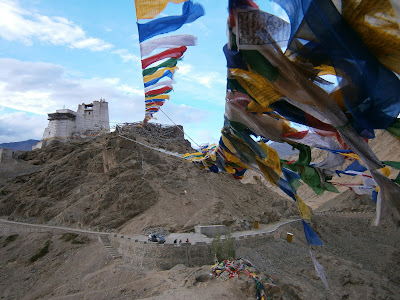 From the top overlooking the town we had spotted some interesting activity in an open area, some sort of fair. The highlight which caught our eye was a rickety looking wooden wall of death. We simply could not resist and soon were making our way down to check it out. We paid our 40 rupees for the show and climbed up what even Steve called a dubious structure. Loose wooden planks formed the wall of death and the structure was held up by scaffolding which all rocked once the show got started. With kids climbing up the back to get in for free, lots of people to make it top heavy and being the only westerners in sight made it all good fun - as long as it didn't collapse. After some warm up people, probably people from the crowd who paid to have a go the real act came out - fantastic! He jumped on his motorbike and was soon whizzing round, leaning up to grab money held out from the top so taking both hands from the handle bars! With this crazy stunt done he got into the car which we had assumed was there for decoration. Surely the structure could not support it? It did but I would say only just. Jaws were slack as the car span up to speed and was running round making everything sway in time. When he hung out the window and steered with one hand jaws had touched the floor and eyes were popping out. Easily the best 40 rupees we spent on the trip and it is hard to see better value for money anywhere in the world.

Giddy with the excitement we had just witnessed we strolled back to pick up Andy and Cliona to head out to eat. I stopped off in an internet cafe to catch up with home and with the rain beating down outside ran into the bar the others were at only to find the rain leaking through the ceiling as well!

We had a day of packing up our bikes in the boxes that had been sent ahead and a short plane trip to Delhi where we stayed for a day in transfer. 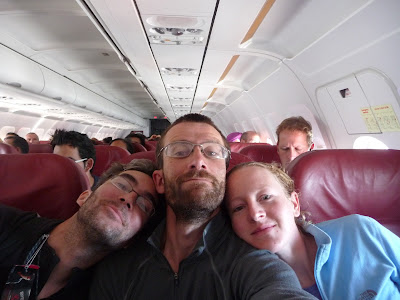 We made the most of our time in the capital heading out to the red fort at night after spending some time finding a place to stay. Here we made a small mistake, opting to see a night show of lights and narration in Hindi - with the dark and not being able to understand the words we all grabbed a quiet power nap. 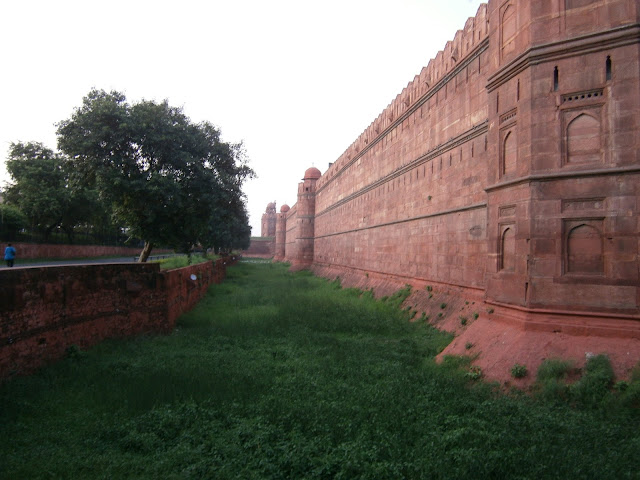 So another trip came to a close. It was certainly a time pressured trip and we really couldn't have lost a single day to mishap so fortune favoured us a little but this often seems the case. It has taken me almost two years to write up this diary - a record even by my sluggish standards - and much has changed since then. Three of us are now fathers for the first time and I've moved to Beijing. All in all it is likely to be a while before we head out on the road again but having been through the journey again through this diary I realize how valuable our trips away have been. Once again I must thank my traveling companions for dragging me along despite my whinges and moans - looking back is easy but at the time it was tough! We never did sell that last power bar to set the final price but maybe, just maybe, there will be another trip to put that to the test.